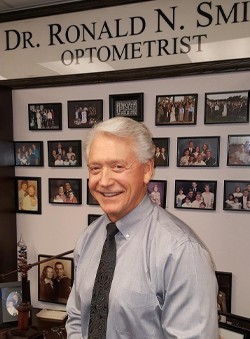 Dr. Ronald Smith is an East Texas native. He played football at TJC in Tyler in 1967 and was blessed to have teachers who cared and guided him through my studies which prepared him for what was to come in his college career.

Continuing his education at Texas A&M, Dr. Smith intended to become a “Vet.” However, his experience in animal science 101 quickly changed his mind. In 1970, he was accepted into the College of Optometry at the University of Houston, where he pursued a Doctor of Optometry Degree. He also married his sweetheart, Rebecca Ann, that year. Having battled dyslexia his entire life, Dr. Smith decided to specialize in child development and therapy.

In 1976, Dr. Smith moved back to Tyler to start his own practice. He received an advanced certificate as a therapeutic optometrist in 1991, and continued growing his practice at Eyes of Tyler.

Dr. Mark Hooton joined our team in 2006, and now leads the practice. Dr. Smith is semi-retired, but continues to care for his patients in East Texas.